18 months ago, I played the story-driven board game Betrayal at House on the Hill for the first time with new friends and fell in love with the sheer scope of its storytelling capabilities.  The fact that no one game can ever be the same appealed to me, as well as the role-playing that ends up coming to play with the characters you inhabit.

First is the premise – it is an easy premise to get: a bunch of characters go into a haunted house and a bunch of mischief ensues, as you have to move around the house not knowing which room card will be placed in front of you or what objects you’ll run in to.  These are easy grounding mechanisms so there is not any inherent complexity.  The game is completely emergent.

Second is the world-building, which is different every time – the first half of the game is just you and the other characters moving around the house and unlocking randomly placed room cards, which are shuffled in a deck and are thus different each time.  The first half is all about getting the feel of the world and the characters, but it isn’t boring because the inherent focus of exploration is powerful enough. 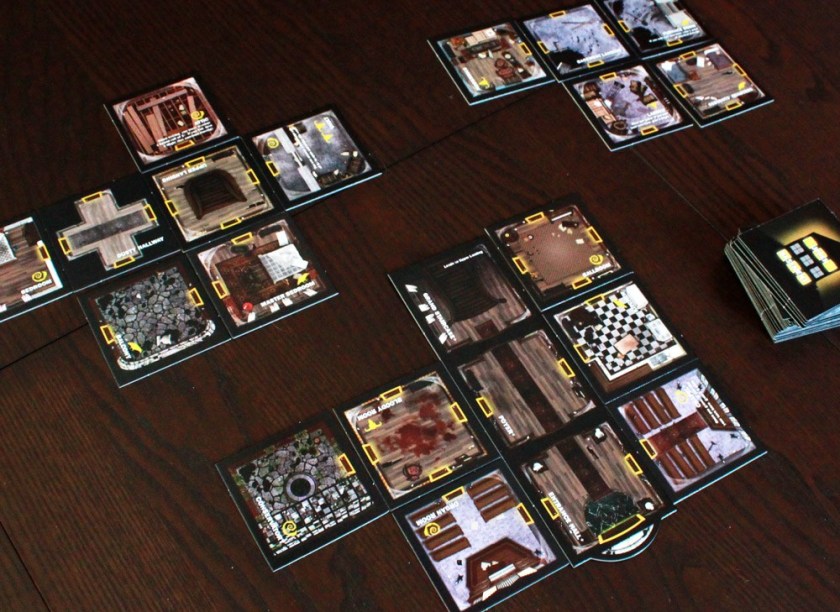 Third is the betrayal itself, which can be triggered depending on the size of a die roll after each time a player encounters a haunted object.  If the betrayal (or the “haunt”) is triggered, the type of monster/event that happens is determined by the object that triggered it AND the room in which it was triggered.  There are 50-some-odd possibilities of this, which means that, in theory, you could play the game 50 different times can get a different type of haunt event.

So, now the board is set and the characters have been established (but, again, inherently simply, with a “bad” guy in the traitor vs. the “good” other characters).  And now, the story can play out.

By having the first half occur rather than just starting on a given board with a die roll to determine the type of haunt, it feels that the players determined both the world itself and the type of haunt they find themselves in.  So, therefore, the story follows feels connected to everyone.  There are stakes.

And, the interesting part here is that, even still, the story can fall flat.

The first time I played Betrayal, I was the traitor and ended up summoning Death who needing to be “playing chess” (i.e. rolling dice) against the other players at all times, or else the traitor/Death team would win.  If the other players could defeat Death before they were defeated or before a turn went by without a fight happening, the “good” team would win.  The “traitor” player could help Death in rolling, but didn’t need to be fought or defeated for the “good” team to win.

This was fantastic.  Twists, a race to a final fight, downed characters giving their “essences” in the form of items to the remaining player in order to continue the fight.  It was easy to visualize a movie that contained this story.

However, the second time I played Betrayal, it felt very different.  We all explored the house, but due to a freaky die roll, the haunt was triggered by I think the fourth turn.  You see, each time a haunted object is encountered, the person who encountered it must roll two dice and “beat” a certain counter number, which increases with each object encountered.  If the player fails, the haunt begins, the player becomes the traitor, and the monster is summoned.  In theory, this is very easy in the beginning because the numbers to beat start out very small.

But in this playthrough, the player rolled a bad roll, and the haunt was triggered with very little of the house explored.  This type of haunt trigger was an angry, demon kid that could kill other players with one shot.  The goal for the other players was to find certain MacGuffins scattered around to give them powers to defeat the kid.  However, with so little of the house explored, it was easy for the kid to move around the limited rooms, find the other players, and kill them very quickly.  By the time just one of the three needed MacGuffins was found, the game was over and the kid/traitor team won.

Not a great story.  No tension.  No heroism.  No buildup at all.

But I didn’t mind.  Because that’s what the game is.  Because the players are in control of so many of the world elements that trigger the story, it remains randomly possible that certain events triggered at a certain time with a certain board structure lead to a limited, flat story.

And other times, other events can be triggered that lead to a story that almost feels cinematic.

High-risk, high-reward storytelling.  So I didn’t mind experiencing the flat story.  Because I knew that I could play the game again, given its vast possibilities, and potential experience a fantastic, player-driven story that I hadn’t even thought of.

The lesson: If the players are in control of all of the elements that make up the game story, and if there are a large number of possibilities given the combination of these elements, then even if the story ends up not landing, it ends up feeling okay.  Because you can always play again.

My current project role is as a writer on the IMU Studios project Thunder: Throne Wars, working on an 8-person writing team constructing character journeys and a companion TV show for the in-development game.  The game’s website and progress can be viewed here.

The videos, photos, and stories seen on this portfolio pertain to my work in film production, game design, writing, and photography.  Some of my work that pertains to other fields, like traditional artwork and songwriting, can be viewed here.

I have written many blog posts about narrative and personal goals.  Of these blogs, the ones that I am most proud of are my deep analyses on the narratives of certain Mario games.  View them here.