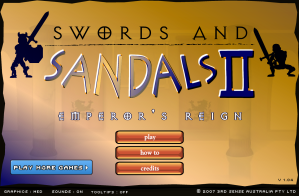 When I was in high school, I stumbled onto a little-known online RPG called Swords and Sandals 2.  The game is fairly straightforward: you play as a gladiator (whom you get to name) during the Roman era, with different stats in the following: 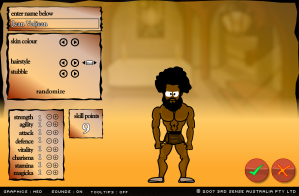 When you click on the Arena, you have the option to engage in gladiatorial combat.  You and a CPU opponent take turns choosing moves such as Walk Forward, Lunge, etc.  In close quarters, you can choose to take a Quick attack (easy to do damage), a Normal attack, or a Power attack (hard to do damage, but heavy damage when dealt).  The higher your skill is in Attack, the better your odds are in all of these categories.  But if your opponent’s defense is high, the benefits of your Attack are mitigated.

Outside of tournament play, you fight your opponent until you weaken his armor and draw first blood.  The winner wins coins and EXP points and the loser loses coins.  Gain more EXP to level up and unlock tournaments.  In tournaments, you have to fight a list of gladiators including a boss gladiator, and this play is to the death.

You start off with 2500 coins.  You can use them to purchase Armor from the armory to build up your armor, and you unlock more armor as you level up in EXP.

You also have the option of purchasing advanced weaponry, either as Swords, Axes, Bashing Weapons like hammers, or Ranged Weapons.  Swords and Ranged Weapons are unlocked in correspondence to your Agility, while Axes and Bashing Weapons correspond to your Strength.  You unlock a new weapon for every 3 Agility and 3 Strength, respectively.

There is some minor strategy in maximizing your money in terms of when to buy things to give you the best advantage over your opponent, as well as choosing which opponents to duel with in the non-tournament mode to minimize risk of losing in order to earn the most money and therefore the best armor and weaponry.  The majority of the strategy is choosing your moves in the Arena.

You also can choose to purchase various boosting magic spells and potions that restore health, armor, and stamina.

The goal of the game is to progress through tournaments and level up until you eventually fight the evil Emperor Antares.

I became interested in this game due to its strategic turn-based gameplay as well as the choices I needed to make in terms of which stats to level up and how this affected my chances.  The version online that I found only went up through three tournaments, so I typically would have some short fun with the game and then be done with it.

A few years ago, I found the game again, only this time a new free version had been released online [1], allowing you to play through the game in its entirety with one small catch: the “save” feature didn’t work, so if you died, all your progress was lost in an instant.

This was the summer before coming to CMU so with some free time on my hands, I gave the game another shot, and after various failed attempts at progressing past four or five tournaments, I figured out a winning strategy:

I needed to upgrade my Agility as soon as possible, while maintaining a steady increase in Attack as well.  See, the Swords that you are able to unlock at higher levels do some extremely brutal damage (the highest-level sword deals 627 damage for a Power Attack, the most in the game), so it became clear that if I unlocked a weapon, quickly, with high-damage potential and enough Attack to at least give myself decent odds at landing a killing blow in one shot, I would be at an advantage.

The other trick was to also use this Agility to buy increasingly powerful Ranged Weapons.  Being able to run around the board and shoot my opponent from a distance to lower his armor without even putting myself in range of being critically hurt gave me an additional advantage.

And then, all of a sudden, I was off, winning tournaments at ease and leveling up to increasingly higher stats.  But I still needed to be careful – because one false step, one wrong move in which an opponent landed a Critical Hit and I died because of bad luck, and it would all be over.

And I began to realize “This is closer to what being a real gladiator must have felt like than what it would be like if the Save feature worked.”  Even the best gladiators in the world needed to be careful with their moves and their strategy because even the greats could lose, and a loss meant death.  Had the Save feature worked, I could have played matches extremely loosely and with little regard for my actions because if I died, no worries.  I could just restart from my last match.

In the end, I spent 9 total hours playing the game without stopping and made it all the way to the final battle against Emperor Antares, but he pinned me against the side of the arena, blocked my Whirlwind attack, and I died.

But the experience stayed with me, and it made me start thinking about the types of games that can capture this kind of verisimilitude with the lack of a Save feature:

I began to wonder where the line should be.  At what point is not having a Save feature basically torture despite the benefit of realism?  Is it dependent on how much content there is in the game?  Swords and Sandals 2 doesn’t have a whole lot of changing locations or environments in it, nor does it have a lot of overworld exploring or backtracking where a player might get stuck.  There also isn’t a sweeping narrative you have to sit through if you restart it. It is a 9 hour game, not a 70 hour game, is that why it worked?  At what point is a Save feature needed because to play a game nonstop for more than a day is detrimental to the players’ actual health?

I suppose, even if it is available, a player always has the option to just not use the Save feature in an effort to capture a realistic experience, but I think that at a certain point, anyone will end up using it because we naturally want the safety net and we get tired.

Maybe there should be a “no Save” option on certain RPGs and games, where players, if they want to, can play through the entire plot without saving.  So many games feature the spectre of death in their narratives, but very few of them evoke a feeling even close to it in real life, because you, as the player, know that even if you die, you can just try again from a fairly close checkpoint.  My playthrough of Swords and Sandals 2 wasn’t literal life and death, but knowing that Jean Valjean (the name of my character) would be lost forever with one wrong move gave a level of urgency and focus that otherwise would not have been there.

Suffice to say, I have yet to fully return to the game since that playthrough.  I’ve noodled around on it once or twice, but I haven’t felt the need to beat it anymore, feeling like I “lived it” enough.  Maybe that should be a goal of certain games in the future.  Sacrifice the joys of replayability to enable one-time playthroughs that feel as “real” as possible.

3 thoughts on “Without Saving: My Journey with Swords and Sandals 2”

My current project role is as a writer on the IMU Studios project Thunder: Throne Wars, working on an 8-person writing team constructing character journeys and a companion TV show for the in-development game.  The game’s website and progress can be viewed here.

The videos, photos, and stories seen on this portfolio pertain to my work in film production, game design, writing, and photography.  Some of my work that pertains to other fields, like traditional artwork and songwriting, can be viewed here.

I have written many blog posts about narrative and personal goals.  Of these blogs, the ones that I am most proud of are my deep analyses on the narratives of certain Mario games.  View them here.